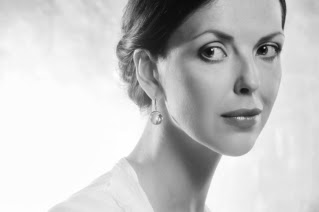 After many months of not discussing much, I am finally back in some sense of tangible rhythm, and with internet access to I can return to my usual output and discussions of Baltic composers.

Today I will quite simply show you all the interview I have been in the process of creating with one of my undeniably favourite composers; Justė Janulytė. There are numerous cases of me praising her various premieres that I have had the luxury of attending over the recent years.

So without further ado, lets move onto the leading lady herself:

Labukas Justė! I want to jump straight into the elephant in the room, when people discuss your music, including yourself, the word monochromatic gets thrown around. What exactly do you mean by that?

Well it all started with my series of pieces for homogenous groups of instruments; only strings, only winds or only voices. And so I called it monochrome music. This term though has created a lot of discussions all the time because the result was rather opposite - if you briefly consider voices - even if they are all male voices, every person has his very individual, specific timbre from which you can recognise him on the phone, for example. The same occurs with instruments, maybe the differences are not so big like with voices but still they are, considering an instrument’s physical characteristics, whether it is old or new, the manner of playing, the articulation and so on. So as a paradox, these formally monochrome compositions, like blank sheets of paper or textile, exalt the colour up to their extremes. Just like looking at the monochrome Rothko paintings - one experiences his blue color in the most powerful and straight way, the colour itself becomes a really strong physical experience. This kind of effect is what I'm trying to achieve in my music as well.

Anyway, after purely monochrome instrumentations, I have gradually extended my limits into various amalgams (like Observation of Clouds for voices, strings and winds, Plonge for cello solo and 12 voices, The Color of Water for saxophone(s) and symphony orchestra, Here at the quiet limit for male choir and string orchestra, 2018) but still remaining faithful to the word mono.. while concentrating myself only on one idea, 1 process (even if cyclical), 1 acoustic phenomenon in one certain composition.

From my own standpoint, I find the word monochromatic extremely reductive, and at times almost counterintuitive. I personally find a parallel between your music and the Buddhist interpretation of emptiness. An emptiness which is defined by the fact the item doesn’t exist because it is constructed of constituent parts, and those parts in turn are empty because they only exist because of everything else. Can you see the parallel?

As Laurie Anderson said once, emptiness must be an utopic space impossible to experience as it would be destroyed immediately while one enters into it. But probably you refer to the fact that taking a single line out of my dense textures it would not have any sense as it works only as a constructive element to build the whole body?! In fact, those single, pulsating lines are like breathing pores of the skin, like the smallest dimension of a big fractal structure. What I’ve tried to do in my latest piece Midnight Sun for cello solo and 54 strings was to ‘zoom’ on the cello solo part in several steps highlighting it in confrontation with the orchestral texture as if it would be written in a bold typeface or if one detail of a dense texture would be observed through a microscope to overlap and represent at the same time different fractal dimensions of the same material.

As we have spent many days discussing our loves and hates, as well as our joys and stresses, I wondered what I could ask you that I haven’t already in some form or other. But I briefly pondered a quote from Hector Berlioz, who essentially remarked if all his music were to be destroyed, except for his Grande Messe de Morts he would be happy. Is there one piece you hope could survive and therefore truly define you?

It’s quite difficult for me to choose one piece as they are connected into a chain of a particular continuous creative process - one idea brings another, sometimes a less consistent result becomes very important later for some further development and so on. What I see quite clearly being a big fetishist of numbers and coincidences is a certain cycle of 7 years - a period of time in which human skin completely changes as they say - a period of time in which I gradually open a new window (maybe still into the same garden but at least from a different perspective or in a different light).

In 2003 I composed a piece for 2 pianos–my first conscious monochromatic piece with a very gradual metamorphosis from ‘white’ to ‘black’ (from diatonic pointilistic melodic lines to clusters) and a spacious stereo sound coming from 2 pianos…
After 7 years came Sandglasses (2010) for 4 cellos, live electronics, and video scenography which, thanks to video-maker Luca Scarzella, has brought up a manifestation of my visual thinking. This previously had only been embodied in musical structures or alluded to within my titles. My collaboration with Michele Tadini and Antonello Raggi helped bring a fantastic world of electronic music to my piece; ultimately producing one the purest conceptual examples of my monochrome aesthetic… And after another 7 years, finally The Colour of Water (2017) was written for a soloist playing with 3 different saxophones (soprano, alto, and baritone) and symphony orchestra, destroying my initial prejudice against the hierarchy in the ensemble and seeing that even very different elements can build one single organism made of different parts almost like organs in a larger striving to make this body live, breathe, and move in space.

What connects all these 3 pieces, which I have realised only now, is my beloved  ‘catabasis’ form - a gradual descending in register, in the Baroque rhetoric, this implied the going down to another world…I wonder when and how this thing caught up to me but probably it's all focuses around  gravitational force, which is one of those phenomena of nature which attracts me the most.

Coming back to my parallels with Buddhist philosophy, would you agree that there is scope for your music to be a tool for meditation? And if so, have you or others tried it?

I don’t think it can be a tool for meditation even if sometimes my music is really slow and makes the listeners loose the ordinary sense of time flow and even go into trance. But it is not meant to be background music for some other activity than just listening to it as it requires quiet strong concentration to be able to perceive the symbolism of the structures, processes, concepts which are embodied inside. I hope it has a stronger force and can evoke wider, richer sensations than a common meditation is able to do. 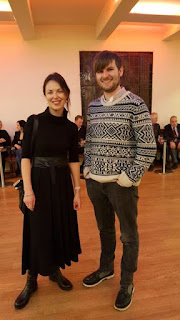 As a Lithuanian diaspora, I can only imagine Italian, or other foreign commentators, have at one point or other dropped a line suggesting an obvious ‘Lithuanian’ or ‘Baltic’ sound. Would you say there is one in your work? How much do you think it matters?

I’m sure my sound is Baltic automatically just because I’m 100% Baltic myself. Moreover my composition studies with Lithuanian composers Bronius Kutavičius and Osvaldas Balakauskas were much longer than with foreign tutors and besides of that the first strongest musical experiences were also connected to the Baltic music like Centones meae urbis (1997) by Onutė Narbutaitė,
ajapajapam by Rytis Mažulis (2002) or Aporia by Šarūnas Nakas (2001), so I’m rather proud to be a part of some Baltic tradition… Anyway, it’s quite superficial to speculate on national or gender issues...hopefully they are enough profound, natural and essential without any declarations.

And finally, as I have done with everyone else. If you were lost on a desert island, with only 5 recordings, what would they be?

From one side it is a very reductive request, from another one - I would definitely be happy to finally get some silence but if you really insist, here is a list of the moment:

To conclude, firstly I want to highlight a personal enthusiasm to get back into the habit of writing the blog, especially as I have missed the actual centenary events in Lithuania and Estonia. So please wait to see more coming in the next few weeks.

And finally from our participant, let us take this opportunity to listen to her Colours of Water with Arvydas Kazlauskas and Normunds Šnē - listen here.
Posted by Makem in the Baltic at 13:48 No comments: