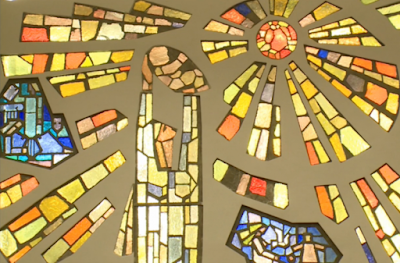 The finale of Druskomanija's Vilnius residency was located in the stunning open spaces of the Lietuvos nacionaline Martyno Mazvydo biblioteka. The stage was set, and an audience had gathered below the warm glow of the stained glass. The concert was a collaboration between Lithuanian and Luxembourger composers and musicians. Any of you who have read older reviews of mine will be acutely aware I am very keen on collaborations like this as it is the perfect place to bring many nations together.

After the opening introductions the ensemble were sat gathered for the first piece Belorussian Spots by Tatsiana Zelianko. In her broken notes, Tatsiana had pondered on how her music was the result of being Belorussian and having lived in Luxembourg for nine years, so I was particularly curious to see the results. In a bright flash it opened. Flying rhythms darted about the space and every instrumentalist danced around each other rather nimbly; like sprites in a forest. The whole work had a feeling of concerto of sorts as the pianist was really going nonstop flying away throughout the work, Sabine Weyer really handled it with a surprising amount of ease. After a while the rhythm and energy didn't quite convert into 'drama' or 'intensity', but the piece still had some fascinating element to it. In the end, it was a fascinating piece to ponder, but the question is was their an epiphany at the end? Tatsiana Zelianko is definitely another composer on my list I need to investigate after this.

Next came the native Raimonda Ziukaite and her Cathedrals. The work opened with a divine fragility, which was made all the more potent by the presence of the stained glass within the space. Gestures appeared. Then they disappeared. The austerity at the beginning was inspired, and extremely well crafted to the point when the overtly tonal elements were in the front and centre it sounded alien. The work had a charm and elegance very much akin to Hans Abrahamsen. Very nicely done, and very nice to hear more works by Raimonda again.

Then came our second member of the Luxembourger contingent. impulses et factures by Nik Bohnenberger was a wild change of direction from the preceding piece. It flew open with a frantic energy. The melodic figures glided majestically and everywhere, at times in a predictable manner, other times in a spasmodic way. The whole work was restless, to the point that the rests gave us no release. The work kept evolving and rolling along on its manic journey and the result was rather fascinating indeed. I did feel towards the end there was something missing, I couldn't say what. It just need that extra stroke of magic to truly captivate and inspire, but nevertheless it was still highly impressive, and still had a strong impact despite some elements not quite resounding properly within the premiere.

The finale came in the form of Andrius Maslekovas and his Brush Strokes. Those who have read the blog know that Andrius was the first composer I interviewed for the site, and in it he mentioned previous works which also are highly concerned with Japanese/Zen calligraphy, read the interview here. However, last night's premiere was an intriguing change of pace. Namely it hit you like a ton of bricks. The whole work showed a composer really in full swagger. The work had a strong personal character and an elegant violence to it, a perfect finale for the concert and for the festival's presence in Vilnius. The intensity never really stops, but it never seems to loosen its grip either. Just hammering us constantly. Those who vaguely are aware of Zen, may be confused by the violence in a Zen inspired piece. But many people forget the sheer violent drunkenness of some of the monks. The whole piece can in a curious way relate to a Zen koan, a personal favourite of mine: What is Zen? Zen is a shit-stick. Bloody well done Andrius a thoroughly impressive piece indeed.

A note must also be given to our Lithubourgian ensemble as they had only formed for this concert alone. They were definitely thrown in at the deep end. They handled the repertoire with grace and managed to add a lot of drama to the works. Very well done to all involved. And I hope the festival's excursion to Druskininkai goes just as positively as this finale in Vilnius.
Posted by Makem in the Baltic at 08:57