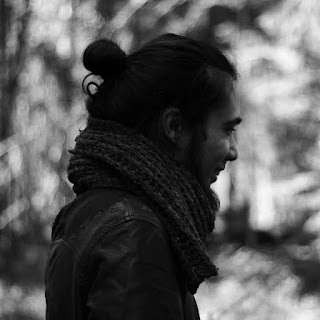 It is time for another interview, the second in my collection. Jachin Pousson is a composer who has fascinated since I met him in 2014. I had the priviledge of being his 'teacher' in the Palendriai composer course, I also had the joy of conducting his work which was premiered in the course. Beyond the sheer joy I found within his music, I am particular curious about Jachin because of the fact that, like myself, he is someone who came to the Baltic looking for a musical alternative and has resided in his cosy dwelling in the Latvian captial of Riga.

The work his I premiered was a curious piece indeed, for accordions and two string instruments. Cirqitri (2014) had this wonderful rolling harmonies which pulsated and shimmered, there was a glorious pull in the work; especially as it was quite so hypnotising. Cirqitri can be heard here.

When I mentioned this process to Jachin, I asked for him to recommend a particular work to portray his output. Mostly from my point of view, every piece of his is full of curious nuances and details which gives each of them a certain glorious necessity to them; so I simply could not choose for myself. Jachin pointed me towards his Tides and Shadows for chamber orchestra as it is a good example of where his music is now, regardless of whether it is his strongest work or not. Tides and Shadows is full of that same richness and rolling harmonies that could be heard in Cirqitri but, due to the expanse of the orchestral pallete, it has a much larger array of colours and gestures. The flowing melodic line is coloured beautiful and always manages to avoid turning into something rather sacarin or self indulgent. A really wonderful work indeed.

So here is the interview I had with the composer regarding his work and his life in Riga:

Hello Jachin, thank you for agreeing to let me interview you for the blog. Firstly, as a fellow foreigner in the Baltic, could you describe what lead you to Riga?
Hello Ben, and thank you for having me. The simple answer is the music. I began formal music education in Copenhagen under Hans Abrahamsen, who introduced me to composers from the Baltics. He gave me a few references to listen to with scores from the library and I began to discover treasure after treasure from this part of the world. The music was intriguing, boldly designed, and resonated on a deeper spiritual level to me. It contained to me a particular, novel combination of modern ideas, but with a solid foundation. At the time I was looking for a way out from what I perceived as fluffy, self-indulged, overtly intellectual or downright slapstick reactional output in the contemporary academic sphere. I began to explore the possibility of moving to the Baltics in my 2nd year of a Bachelors degree in composition, and managed to find a place as an exchange student at Jāzep Vītols Latvian Music Academy in late 2012. When the year was up, I realised I’d only scratched the surface and decided to continue my education as a Masters student in Riga. I’m still discovering great music here in Latvia, as well as music from Lithuania and Estonia.

And for those unfamiliar with your work, could you describe your concerns and obsessions as a composer?
I could say that early on I was obsessed with the schools of sacred minimalism, impressionism and spectralism. Much of my output has attempted to manifest at the intersection of these over the years. I’m thoroughly obsessed with the sculpting of texture, and places where individual melodies reach a speed or rhythm where they begin to be perceived as texture. The line where the threads becomes fabric, which can then be treated and transformed on a different material level. I’m also obsessed with large scale patterns and behaviours observable in nature. I like making musical analogies from these,  for example, music that describes the morphing shapes in starling murmurations, or the refraction of light through amber, or looking further outward, the chaotic orbit of Pluto and its phase-locked moon Charon. As a student I was motivated to find my own way of abstracting these in a perceivable, enjoyable way. There was poetry in the math that described the phenomena that captivated me, but it wasn’t easy to turn the math into music that produced a vivid impression of the source. However as I began to find my own way, I became more motivated to be honest with my output. It wasn’t enough to write a successful abstraction of a natural phenomenon. Today I want to communicate something more personal, and this calls for honesty.
I am concerned with objectivity. Hans Abrahamsen used to say to me that as a composer it is very important to be objective. Over time I think I’ve come to understand what he meant. Music is a subjective and emotional experience, no matter what role you play. To be objective is to be able to see a thing for what it really is and grasp the value of the elements important to it, whether or not it appeals to you personally. In retrospect, the academic composition exercises that were the most painful to the ear and mind initially, truly unlocked the doors of perception that allowed for deep appreciation of music I’d never have naturally selected for myself. There’s no two composers exactly alike, and for an environment to be supportive of explorers, contemplators, and those more aligned with tradition, I think objectivity is key.

Within your work, I often see attempts to connect to the ancient as well as connecting to the very new. How do you juggle this conundrum of ancient and modern? Where do you think, you achieved this balance best?

The way I see it, there are many powerful and ancient archetypes we carry in our collective human consciousness. The image that came to mind was that opening chapter in 2001 A Space Odyssey where prehistoric primates gathered curiously around the black rectangular alien monolith to the soundtrack of Ligeti’s Requiem. The combination so spellbindingly captivates and spurs the imagination! Of course, composers embed symbols within music all the time. I suppose in my own work I’ve simply decided to reach further back and further forward, attempting to embody the ancient within the forward-looking, or vice-versa. I don’t know where the balance or rather the contrast was achieved best, but my most recent attempt was in a work called Rituals for mixed choir, piano and percussion last Spring. I incorporated singing techniques from Inuit and Mongolian throat singing with melismatic material culminating in spectral clusters with evolving forments. This was accompanied by timpani, tom-toms, sleigh bells, and a piano playing mostly rhythmically within the body of the instrument. I chose to write the text in Japanese, as I felt it to be a suitable language to capture the ancient past and the distant future poetically. I was happy with what emerged from this combination, and must credit the conductor Krišs Pozomkovskis for his outstanding interpretation.

As you have been living in Riga for quite some time now, how connected do you feel to the contemporary music scene? Do you feel like an outsider looking in or are you completely adopted into the scene?
Good question. How do you measure a feeling of connection? I’ve been an outsider all my life, having lived rootless and restless in many places. Riga was perhaps the first and only place I’ve sensed what home must feel like in terms of a physical location. I’m a local in the sense that this is where I’ve made music and bought my bread for the last 4 years, but I recognise there are many things I will simply never understand. The contemporary scene in Riga is wonderfully active and inclusive, and it’s been an enormous privilege to be able to grow and contribute within it. But it has its inner workings which are still mysterious to me. Sometimes I’ve felt passed over in favour of a local colleague. But other times I’ve been given opportunities I would say I scarcely deserved. In short I have somewhat stopped pondering this issue of how connected I feel to the scene and rather focused on how can I best contribute to it and build it up together with my esteemed colleagues in our time.

How do you think your studies have affected this?
Well, studies were essentially the platform for entering the scene. As a student, most opportunities to have your work realised came from within the academy. Post graduation, most opportunities come from people you’ve developed personal relationships with during studies. I suppose it’s the natural order of things. It’s all about who you know. It’s great to be able to revisit say, an ensemble or a solo musician and collaborate outside the walls of the academy. I believe this continuity is meaningful and propels the scene forward.

From your point of observation, who would you say are the most notable and interesting composers working in Riga today?
There are several generations of composers working in Riga, and there are notable and interesting ones within each. Though it may be obvious, I must mention Pēteris Vasks, since his music called to me the most when I was first drawn to Baltic music. He, Pēteris Plakidis and Selga Mence perhaps represent the most notable from the older generation from the point of view of my experience so far. From the middle generation, I must mention Rolands Kronlaks, Jānis Petraškevičs and Ēriks Ešenvalds. Each pushed the envelope of modern ideas and techniques along vectors of their individual interests, and all are in positions to influence and inspire the younger generation. The younger generation is harder to pinpoint as it is less consistent - that is, it is the most spontaneous and adventurous. But from my point of observation, I could mention that I keep an ear tuned carefully to Madara Pētersone, Evija Skuķe, Linda Leimane and Platons Buravickis.

And finally, like I did in my last interview, let’s do the desert island discs and which 5 pieces would you want with you if you were stranded on a desert island?
Perhaps a mix of things that have always managed to move and intrigue me - and have important memories attached. Tomorrow I’ll likely have changed my mind on one or two of these, but if I were leaving today, I’d take Arvo Part’s ‘Tabula Rasa’, Peteris Vasks’ symphony for strings ‘Voices’, Georg Friedrich Haas’s ‘In Vain’, Toru Takemitsu’s ‘In An Autumn Garden’, and… Miles Davis’s ‘Flamenco Sketches’.

So to close here is a wonderful rendition of Voices by Peteris Vasks.